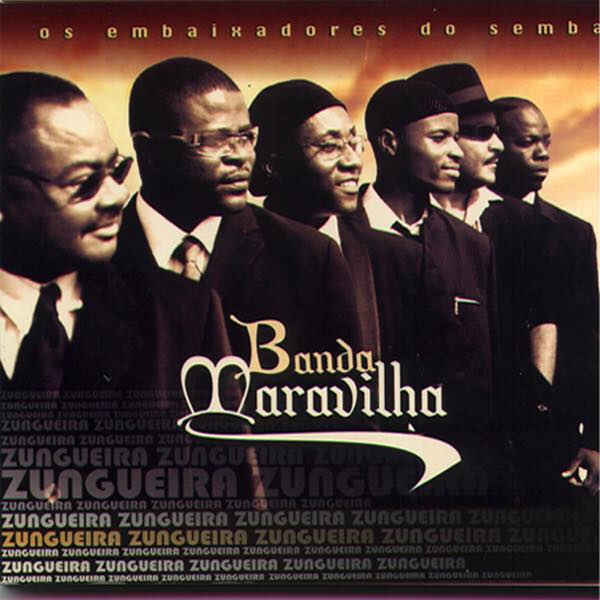 “Maravilha” means “wonder” in Portuguese and one can certainly make the case that this band is arguably the 8th wonder of the semba world.

During the first part of the Angolan civil war (1975-1992), music production in-country was virtually defunct. The main record labels simply had no means to survive due to the lack of government subsidies. At that time, only a handful of musicians could afford to release new albums, usually recorded and produced overseas and only possible thru private/corporate funding.

It is under these hardship conditions that, in 1993, Carlitos Vieira Dias, Moreira Filho, Joãozinho Morgado, Marito Furtado and Rufino Cipriano decided to form Banda Maravilha, each one of them coming from other bands.

The band followed in the footsteps of the great semba bands of the golden 1960s – 1970s’ era, such as the imortal N’gola Ritmos (arguably their main source of inspiration), Kiezos, Merengues, Águias Reais, Jovens do Prenda, etc, etc.

Initially, Banda Maravilha started performing live in some restaurants and cultural venues of the Luanda nightlife. However, they became more known to the wider Angolan public when they were the resident band for the national TV show “Gentes & Tons” (People & Tones) presented by the great artist and music intellectual André Mingas (RIP).

The band also attained recognition from other musicians and, over the years, they have been invited to work – both in live concerts and as support for studio recordings – with some of the most prestigious Angolan artists as well as with other greats from the lusophone music hall, including, amongst others, Cape Verdean legends Tito Paris, Luis Morais, the colossal Emilio Santiago (RIP) from Brazil, etc.

Most importantly, Banda Maravilha is often credited for their invaluable contribution towards rescuing semba from the jaws of death because they remained true to the essence of hardcore Angolan rythms at a time when kizomba music exploded and when Caribbean zouk and Cape Verde music were overwhelmingly predominant in Angolan house parties, nightclubs, and radio stations.

Interesting enough, the band members claim that sometimes they were booed by the younger audiences when performing live on stage because they were making semba music with real/proper instruments (guitars, tumbas, bass, etc) instead of the kizomba music which could be pre-programmed in studio with a piano, synthetizers, etc. [*shade thrown here at Eduardo Paim ?]

But they persevered. Thankfully so. ¼ of a century later and with 4 albums to tell their illustrious trajectory, they definitely imposed their will and made their mark. Today, only 2 of the original founding members remain part of the band (namely Moreira Filho & Marito Furtado) whilst 4 others have joined (incl. a female voice, Djanira Mercedes). Nonetheless, BM keeps going strong. Indeed, like Marito best describes them:

“We are like coconut trees – we can be bent but never broken.”