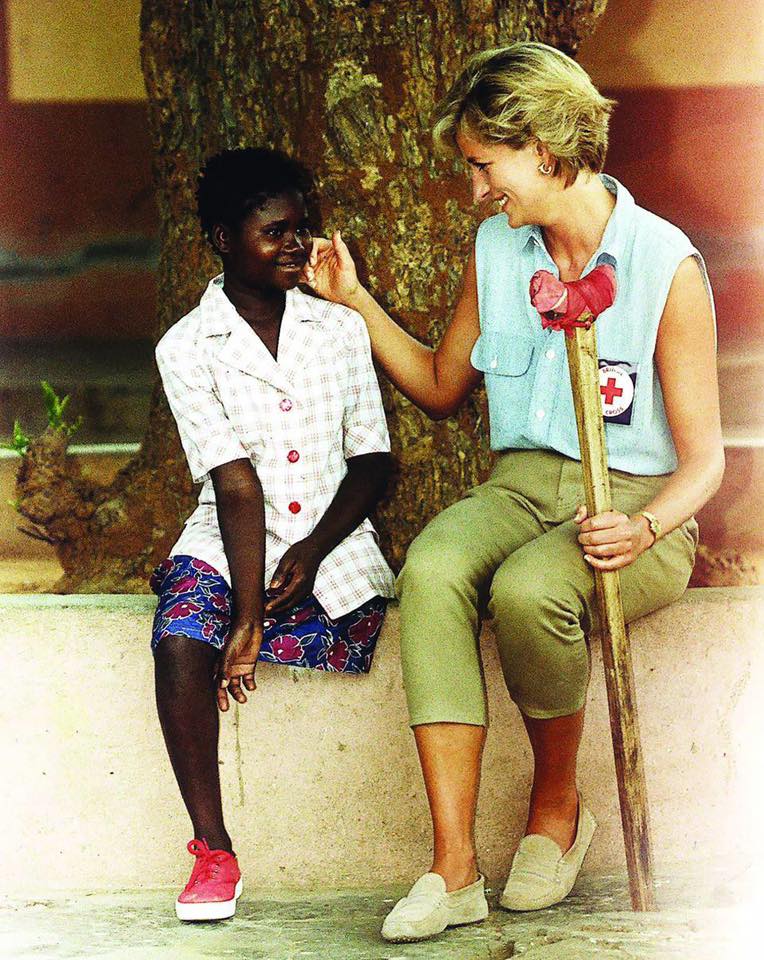 One cannot expect somebody who’s never been to Angola – or knows nothing about its troubled past – to fully grasp how the simple act of dancing, singing and socializing has always served as collective catharsis for its people. As Achille Mbembe, highly respected Cameroonian philosopher and political theorist puts it:

“Music has the capacity to marry soul and matter. Indeed, in Africa, music has always been a celebration of the ineradicability of life, in a long life-denying history. It is the genre that has historically expressed, in the most haunting way, our raging desire not only for existence, but more importantly for joy in existence – what we should call the practice of joy before death”.

One of Princess Diana’s most iconic images ever is her sitting next to a 13-year old Angolan girl, Lizete, who had lost her left leg to a landmine while going to get groceries with her mother in Huambo, a then war-torn province in southern Angola. At the time Lady Di visited Angola in 1997, Lizete had been waiting 3 years for a prosthesis.

Up to that point, Angola was virtually unknown to the average westerner; understandably so as war, famine, destruction and death were the only images typically associated with the country since the mid-1970s.

The Angolan civil war ensued soon after independence from Portugal in 1975. The transition of power in the Portuguese colonies was notoriously rushed, cumbersome and, overall, poorly executed. In the particular case of Angola, there was the added factor that the USA & USSR (former Soviet Union) had a huge appetite for geo-political control of a key, natural resource-rich country located in a strategic region of southern Africa. As a result, this led to a brutal civil war that was only interrupted in May 1991 soon after the fall of the Berlin Wall and with the subsequent end of the Cold War. After the first democratic elections in September 1992, armed conflict resumed and prolonged for another decade.

Arguably, no other PALOP country experienced more suffering in the post-independence era than Angola. Millions of lives lost; families broken apart and displaced from their homes; some mothers lost several sons in combat; often children became orphans of both parents; folks lost contact with loved ones as they were fleeing war-affected areas and never saw them again.

For decades, and before the crude oil boom, before the kuduro hype overseas and before the current exportation of kizomba to European dance floors, kizomba was probably the main (if not the only) source of pride for Angolans – together with banga, that indescribable “swag” Angolan men and women apparently tend to possess.

10 WAYS YOU CAN SHOW RESPECT

It is rather popular now in the so-called kizomba world for people to talk about and reiterate the importance of respecting “the culture”. Recently, we were asked: to Angolans, what does that mean, exactly?

Perhaps, it is easier to just pinpoint ways in which kizomba aficionados can demonstrate a greater understanding and appreciation of Angolan culture as far as kizomba is concerned:

1. In debates of this nature, we strongly suggest you avoid saying things such as: “what’s the big deal? It’s only a dance. Get over it.” Otherwise, when you do that, Angolans might feel that you are willfully ignoring all the historical background outlined above.

2. Make an effort to try to learn as much as possible about the country’s history and how it’s intrinsically tied to the birth of semba and kizomba. By doing so, you’re indirectly showing empathy for all that grief from years past.

3. Yes, dance is an art but that doesn’t mean you should do whatever pleases you with kizomba under the umbrella of “evolution”. If you exercise your personal creativity as a dancer or instructor within reasonable boundaries, you’re also honoring the plight of millions of people who used this same music and dances (semba, kizomba, etc) to purge the pain of humiliation inflicted during nearly 500 years of colonialism and to bury their sorrows during almost 30 years of civil war, death and destruction.

4. Avoid tweaking your Facebook name to include some ridiculous variation of the words “Kizomba” and “Semba” solely for marketing purposes (regrettably, even some Angolans do the same ?).

5. Be humble and understand that it takes years to master kizomba/semba and that you will not achieve the required level of competency to teach others after attending 2 or 3 workshops at a big festival somewhere in Europe. And, when you are finally ready to start teaching the dance, make sure that you equally empower yourself with knowledge of the socio-cultural environment in which kizomba was born decades ago. That way, you can grasp how and why it grew in Angola (and in the PALOPs at large) before hitting your local dance scene in Paris, New York, Toronto, Sidney, etc.

6. If you know too well that you teach neither kizomba nor semba, then that’s fine but just make sure you advertise as such in your classes and demos. That will prevent you from being labeled an opportunist or, worse, an impostor.

7. If you’re a promoter and you organize only urban kiz-oriented festivals/socials, do not sell them to the (naïve) masses as kizomba events. It is becoming increasingly clearer that nowadays these are two separate dances which ultimately provide distinct experiences on the dance floor.
Same applies to DJs – be truthful to who/what you are and folks will respect your craft accordingly. At the end of the day, there seems to be sufficient market in almost every major kizomba scene for both camps.

8. The etymology of words can often get diluted with time. There are plenty of examples of elements from African culture whose names were eventually lost in translation after being “exported” to the transatlantic diaspora(s). “Kizomba” has a rich, specific meaning in Kimbundu which Angolans would like to preserve as the dance explodes across the globe. Thus, avoid using and abusing the abbreviations “kiz” or “kizz” merely out of convenience and/or for commercial reasons.

9. When you go to a social, do socialize! Don’t just try to get as many dances as you can, i.e. as if you’re at the gym and you have to complete a set number of weight-lifting exercises. That’s not the point nor the essence of the dance.

10. When you go to kizomba events – especially evening ones – always look your very best and dress to impress. This is valid for both men and women and it’s actually a deep-rooted aspect of the kizomba culture.

Based on our observations at certain kizomba events, we could have expanded this list further to 20 or 30 items. However, the key point we’re trying to emphasize here is that kizomba per se is more than just a “ballroom dance” – at least from an Angolan standpoint.

EACH ONE OF US HAS AN IMPACT

For us, Kizomba is not only a platform to reunite with friends and to debut your new shoes/outfit; it is above all a vehicle for social gathering, a pretext to eat and drink and – for a few hours – forget about the hardships and vicissitudes of this life. So, every time you take the floor, embrace the essence of the dance, for you have been given the opportunity to witness and honor a profound history.

They say when life gives you lemons, make lemonade, right? Well, start looking at kizomba as the brown sugar in that lemonade and your experiences might be totally different. For the better.